I never ever thought when I started this blog nearly three years ago that I would ever experience someone STEALING my blog and also my identity. I feel absolutely disgusted and sick that someone would take the time out to try and claim my content as their own.

Not only have they stolen all my blog posts and the hard work I have put in, they have also tried to claim images of MYSELF as being them. Like who actually does that? I feel sick at the thought of someone trying to take my own identity away from me and pose as themselves.

What makes matters worse is that they have stolen my mental health posts, where I talk about my personal struggles and the hard times I have been through, that has quite nearly killed me at times. It makes me feel so upset that someone would try to claim my own health struggles as their own.

It’s honestly disgusting and I can’t believe someone would stoop so low to do such a thing.

I honestly have no shame in making this issue public and naming them publicly, because people like that deserve to be named and shamed for what they have done. I do not deserve to be taken for a fool and have everything I have worked hard at stolen from me.

It’s beyond a joke.

I have seen this happen to SO many people before and it’s just an awful thing to go through. No one’s hard work should be taken from them and stolen for someone to claim as their own.

As you can see in comparison to my blog you’re reading right now, Amy has tried to change up the header and switched her name for mine in my about me widget on the side bar. She’s also removed the social media widgets, which she also doesn’t have any social media channels from which I have tried to find, but came back with no such luck. But hey, there’s my face!

The top one you can see me outside the 02 which was just last Wednesday where I went to go see Harry Styles and even vlogged the experience on my Youtube channel. Oh and there’s me again in today’s post (Friday 20th), sitting on my bed in my room on my boyfriend, Matt’s laptop, with my fluffy cushion.

And there’s also that photo of me in the sidebar, which was took last year before I went out for my first meal in a restaurant after years after crippling anxiety. It’s just beyond a joke that she thinks someone will believe it’s her!!!

As you can see, ‘Amy’ has basically copied word for word my about me page, but changed my name ‘Lauren’ to ‘Amy’ and changed my location from ‘Norwich’ to ‘Bristol. She’s also 20 years old as well, I guess her birthday is also in less than a couple of weeks time and she’ll be 21 then too?

Apparently Amy has been writing her so called blog since June 2015 as well, I guess that was also when she finished college and wanted a hobby just like me, right?

I hear that she also works from home, but is looking for social media and digital marketing opportunities. What a coincidence, right? She also loves pink things and puppies, which is such a surprise, because SO DO I!!!!

But towards the bottom of this page, she actually messed up and which was how I caught her out. I was googling my Twitter username and came across her blog. I found every single thing had been copied. But she forgot to delete out the part where my a link to my Twitter is included… 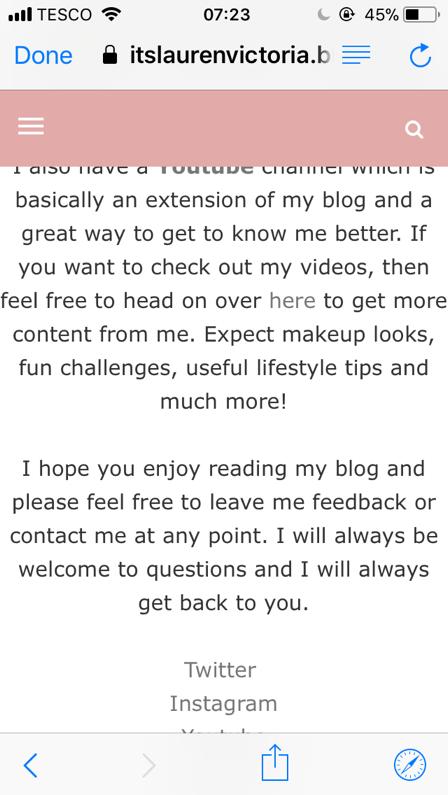 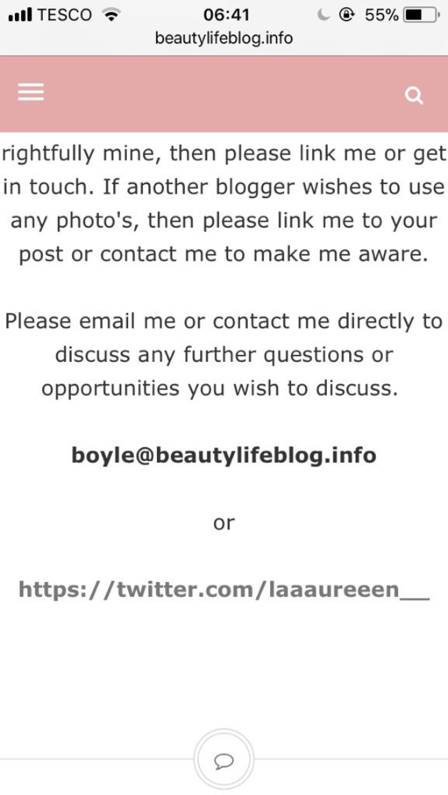 I wanted to do this post to explain the story to you guys, but also seek out any advice if this has happened to you in the past or anyone you know. I’d love some help with this as I’m way out of my depth right now.

Someone has stolen my identity and all my content. Not only is it content theft, but it is also identity theft and an offence.

Thanks so much for reading always,

14 thoughts on “Someone Has Stolen My Blog And My Identity”